On Friday, April 12th the VHS Low-Cost Spay & Neuter Clinic performed its 75,000th surgery. This is an extraordinary milestone that we are so excited to achieve! 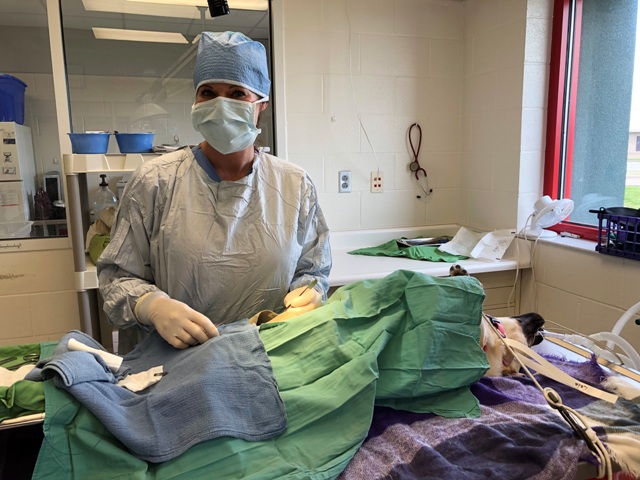 The 75,000th patient was a female dog named Leia, pictured, who is a publicly-owned Pug-Husky mix. Dr. Julie Gray, DVM, the VHS veterinarian, performed her surgery at about 11:15 am on April 12th with no complications.

In July of 2007, the VHS opened the Davidson/Rausch Low Cost Spay/Neuter Clinic to begin to reduce the number of animals surrendered to the VHS and other shelters.

Spay/neuter is the only permanent solution to the complex problem of shelter overcrowding and the overpopulation problem, not only in Evansville but worldwide. Millions of animals each year (up to 4,000 locally) are euthanized as a direct result of animals left unaltered in communities. Getting animals adopted is, of course, still a priority. But it is not nearly enough to curb the overpopulation problem. There are simply not enough homes for the animals that already exist, much less all of their offspring. Our clinic is stopping the problem at the source. If unwanted litters of puppies and kittens can be prevented from being born, then there are fewer of them to end up homeless in shelters and running the streets. Reducing strain on shelter systems also allows them to devote more resources to each animal, thereby increasing each animal's chance for a positive outcome.

“Our Spay & Neuter Clinic is arguably the most effective tool that our community has to combat pet homelessness,” says Amanda Coburn, VHS Development Coordinator. “From 2008, the first full year the Clinic was open, until the end of 2018, we have reduced euthanasia at our facility by 85% in 11 years. We strongly believe that the Clinic is the biggest part of that.”

For example, as of Friday, the VHS has altered 25,785 female cats. Just for convenience, let’s just use 26,000 as an estimate. That averages out to about 2100 female cat surgeries each year for the almost 12 years the Clinic has been open.

If half of those 2100 female cats (1050) would have gone unfixed and gone on to have one litter of 5 kittens each that would’ve resulted in 5,250 kittens in the first year alone.

Now, if those same cats had had another litter of 5 the following year and half of their kittens had also had a litter of 5, that results in 18,375 kittens in year 2.

For year 3, imagine that the original 1050 moms had yet another litter of 5 each. Half of their kittens and half of their grandkittens also had a litter of 5. That number is 64,315 unwanted kittens born in year 3!

These are mind-blowing numbers. Those figures do not, of course, include cats who had more than one litter or who had litters larger than 5 kittens. Since cats can have 2-3 litters per year and each litter averages 4-7 kittens, these are actually conservative estimates. It also does not include the 20,000+ male cats we’ve fixed, who can impregnate multiple female cats at a time. 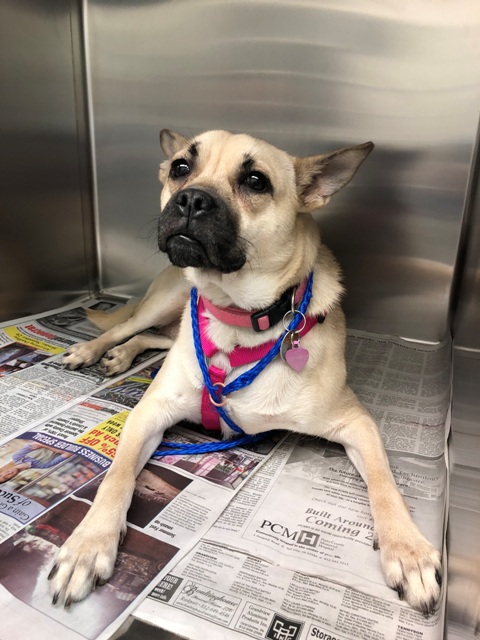 All these statistics can be repeated for the tens of thousands of dogs we’ve fixed, too. Female dogs average one litter per year, with the average litter number being seven according to the ASPCA.

The numbers are exponential. We have easily prevented millions of kittens & puppies from being born into a society that does not have enough space, staff, or resources to care for them.

While these 75,000 surgeries are making a difference, we know we still have a long way to go.  For example, the VHS currently has more than 150 cats in our care and looking for new homes. Other agencies such as Evansville Animal Control are still seeing thousands of unaltered animals coming into their facilities each year. We must press on until all local companion animals are happy, healthy, and loved.

The Vanderburgh Humane Society Low Cost Spay & Neuter Clinic serves three demographics.  First, every dog, cat, and rabbit adopted from the VHS is altered before it goes home. Second, we are open to the public as an affordable option to spay or neuter a pet. We also accept SNAP vouchers at our Clinic, which funds surgeries for low-income Hoosiers through Spay-Neuter Services of Indiana. Third, we are collaborating with other area animal welfare agencies to offer our clinic services to their animals and their communities. We perform the majority of the spay/neuter surgeries for 11 local agencies to help combat pet overpopulation, including:

Public surgery prices can be found at the "Clinic" tab above.

The public can make an appointment for their pet by calling the VHS at (812) 426-2563. We perform surgeries Monday-Friday by appointment, excluding holidays. Clients DO NOT have to live in Vanderburgh County to use our services.

People or businesses can help underwrite the cost of surgeries for our shelter animals by donating online, stopping by our facility at 400 Millner Industrial Drive, or by mailing in a tax-deductible gift to VHS, PO Box 6711, Evansville, IN  47719. The average cost of a surgery is $50.