June is Pride Month! According to GLAAD, Pride is celebrated in June "to commemorate the anniversary of the Stonewall Rebellion in New York City on June 28, 1969, which most historians consider to be the birth of the modern LGBT movement." 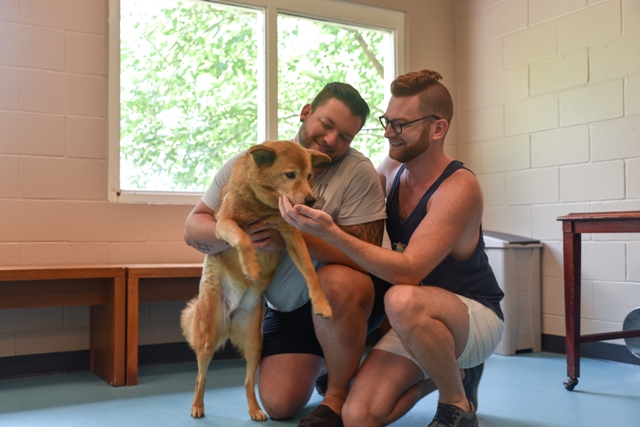 Photo credit: Gina MontanarelliSo what, you ask, does Pride have to do with an animal welfare organization?

It's simple. Every single day, we help animals in all kinds of situations. And every single one of those situations has at least one (and often multiple) people involved. After all, the animals don't walk in the front door by themselves! Whether it's a Clinic client dropping off their pet for spay/neuter services, or a family looking to adopt a new companion. Whether it's a domestic violence victim fleeing abuse who has been reunited with their pet to start a new chapter together, or someone who is facing hardship and has no choice but to surrender their pet. Not only are we here for those animals... but we're here for their humans too, no matter who they are or who they love. (And let's not forget our own team members, doing very emotional and often thankless work 365 days a year!)

Animal welfare = people welfare. The bond between humans and animals is real. It has been studied and even without scientific research, we all know it is undeniable. The work t

Photo Credit: Shellback Photographyhat we do affects people just as much as it affects animals, and it would do a disservice to our organization and many others to ignore that fact.

So to every person utilizing our services, shopping at Happy Tails Resale Shop, visiting River Kitty Cat Cafe, and to every donor/social media supporter cheering us on from afar... we see you. We support you. And we are a safe haven for both you and your pets.

That's why we celebrate Pride month. Here is our official Pride statement:

"The Vanderburgh Humane Society and River Kitty Cat Cafe proudly support the LGBTQ+ community and all of our team members & volunteers, including those who identify as LGBTQ+. We are committed to celebrating the human-animal bond. Love is universal between pets and people, and between people & people. And that means ALL people. Happy Pride Month from all of us at the VHS."